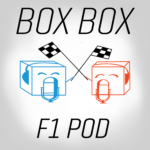 To sum up our takeaway from the McLaren documentary in three points:
1) Bruce McLaren was literally the coolest
2) Kiwis might be the loveliest group of people ever
3) We feel majorly justified in being McLaren fans 'til we die

But before we delve into our McLaren analysis, we've obviously got to chat about F1 summer holidays and what everyone's been up to. Boxes, let's get to it!